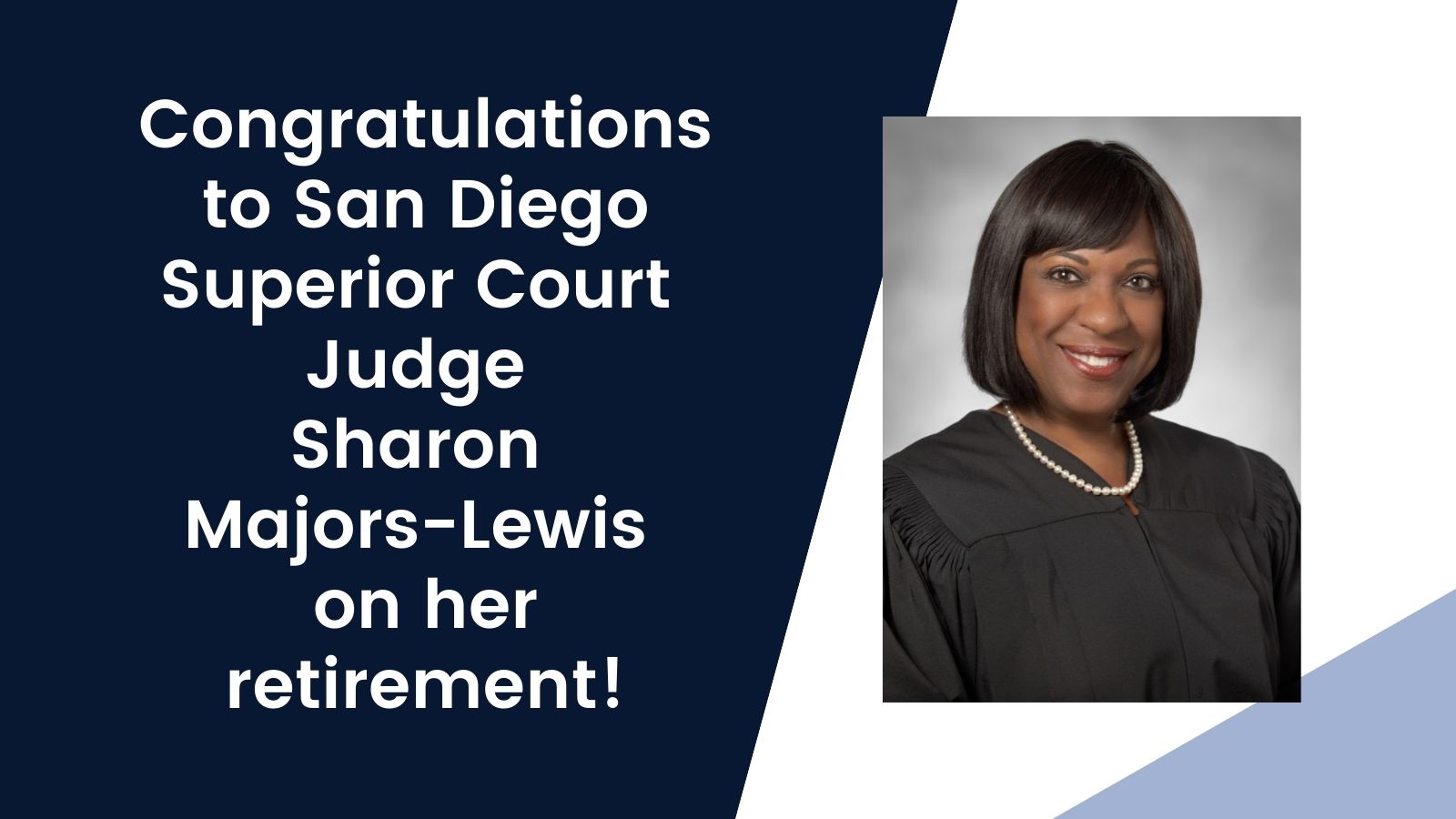 The Honorable Sharon B. Majors-Lewis will retire from the San Diego Superior Court today after several decades of public service. While serving as a distinguished San Diego Superior Court judge, the first-ever woman or minority to be a California Governor’s Judicial Appointments Secretary, and the first minority woman to be a Chief Deputy District Attorney for San Diego County, Judge Majors-Lewis has tirelessly protected the rights of California residents, particularly those from vulnerable groups; economically challenged individuals, minorities, women, and children.

Before becoming an attorney, Judge Majors-Lewis worked in various commands within the Department of Defense from 1968 until 1987. Her proudest accomplishment comes from her time working for the Pacific Fleet Naval Air Force. She maintained the files for every prisoner of war captured during the Vietnam War and was there when the country welcomed them back after their release from captivity.

She worked part-time as a sole practitioner, handling family law and civil law and motion matters between 1985 and 1987, when she was hired as a Deputy District Attorney. She specialized in prosecuting violent crimes and in particular, abusive head trauma child homicides. She later held supervisory positions within the District Attorney’s Office and was the first Black woman to be Chief Deputy District Attorney in San Diego County.

She left the District Attorney’s Office to become Governor Arnold Schwarzenegger’s Judicial Appointments Secretary, where she served from 2007 until 2010. Over a decade later, she remains the only woman and one of three persons of color to hold that position.

During her time as Judicial Appointments Secretary, she received many honors and awards based upon her work diversifying the California Judiciary. Judge Majors-Lewis sought out people not only from different racial and ethnic groups, but those with different cultural backgrounds within those groups.

Among the honors received while she was Judicial Appointments Secretary included being named as one of the Top 100 Lawyers in California in 2007-2010 by The Daily Journal. She was presented with awards by Assembly Speaker Fabian Nunez, Assemblyman Mike Davis, the Los Angeles County Bar Association, and numerous other bar associations. She also received the Bernard Witkin Award for Civic Leadership.

Judge Majors-Lewis served on the YWCA Board of Directors from 2006-2010 and was the Audit Committee Chair in 2010.

“Being a judge is certainly one of my proudest accomplishments. Judges truly hold the lives and well-being of our citizens in their hands,” said Judge Majors-Lewis. “Making a decision about whether a person goes to prison or not, is not a simple task. The law is nuanced and rarely clear-cut. We see many people at the worst times in their lives, and sometimes the pain expressed by our victims is palpable. Often we see people who display extraordinary courage in the face of unspeakable situations. It was an honor to be entrusted with this important responsibility.”

“Judge Majors-Lewis has been an outstanding member of our bench and she will be missed by her colleagues, staff and lawyers,” said San Diego Superior Court Presiding Judge Lorna Alksne.

After retiring, she plans to travel, and spend more time with her sons Dennis and Devin, their wives, and her grandchildren. She also plans to keep herself immersed in the law and write a book regarding her incredible life’s journey from the segregated small town in East Texas where she was born, to the State Capitol and beyond.

Throughout Judge Majors-Lewis’ remarkable career, she has protected the rights of underserved citizens from every position of life and has encouraged every person to never say never, but rather to follow their dreams, no matter how lofty they may seem.