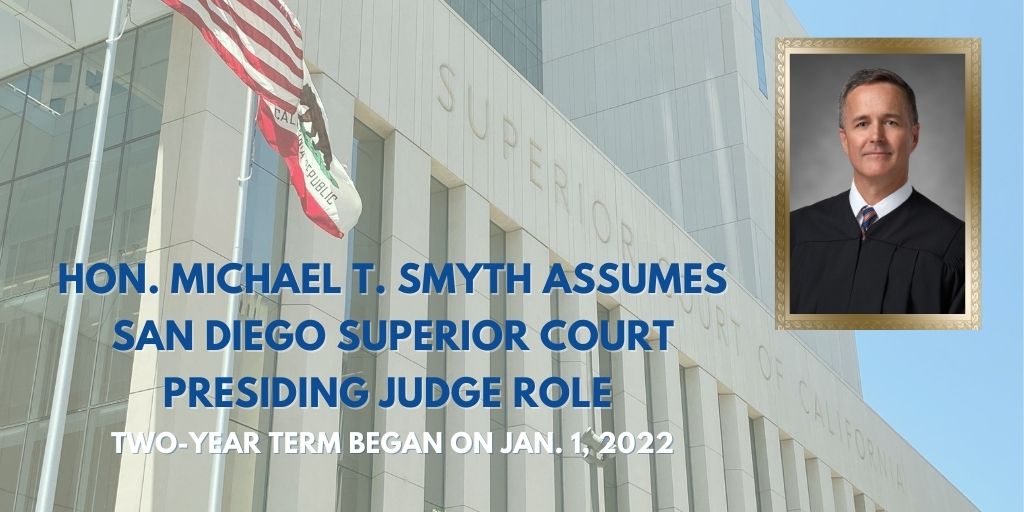 January 12, 2022 – Judge Michael T. Smyth assumed the top judicial leadership position as the San Diego Superior Court’s Presiding Judge on January 1, 2022. He was elected by his fellow jurists in August to the two-year term and served as the Assistant Presiding Judge during calendar years 2020 and 2021. He succeeds Judge Lorna A. Alksne who finished her term as Presiding Judge on December 31, 2021.

“I am deeply honored to be entrusted by my colleagues with the great responsibility of leading the San Diego Superior Court,” said Judge Smyth. “The pandemic has seriously challenged every corner of society, and our justice system has been no exception. As we emerge from the pandemic, my colleagues and I – the entire court – remain committed to ensuring fair and timely access to justice for all members of our community. A welcome break in the clouds of the initial COVID-related service limitations in the spring of 2020 was the lesson that we can successfully handle many court hearings remotely, which has made it much easier for litigants and attorneys to appear, with less disruption to their lives and less risk to their health. We will take what we have learned, and continue to innovate and modernize the way we conduct court business.”

Throughout the next two years, Judge Smyth will lead the San Diego Superior Court in the oversight and management of court operations, 154 judicial officers, approximately 1,200 employees, and a budget of just under $200 million. Judge Smyth works closely with the Court’s Executive Officer and management team alongside an Executive Committee of Superior Court judges.

Judge Smyth has served as a Superior Court judge since 2003 and was previously the Supervising Judge for the Criminal Division. Before joining the bench, he was the legal advisor to then-San Diego Police Chief David Bejarano and a deputy city attorney for the City of San Diego. Judge Smyth earned both his undergraduate degree and law degree from the University of San Diego.

Judge Maureen F. Hallahan now serves as Assistant Presiding Judge following election to the position by San Diego judges in September 2021. Judge Hallahan was appointed to the San Diego Superior Court in 2007 and served on the Court’s Executive Committee while also presiding over criminal trials. She attended SDSU for her undergraduate degree and earned her law degree from the University of San Diego.